Here is the new and expanded NJ Weather Authority forecast region. If you notice I use big  temperature ranges in my forecasts of around 10 degrees, this is due to the relatively large size of the forecast area, just know that the lower end of the temperature scale would be from Conneticut  to Southern Upstate New York , Northeastern PA and NORTHERN AND Northwestern New Jersey , the  New York City metro to Northeastern  and Central NJ would be in the middle of the temperature scale  and Trenton, Philly to Northern Delaware would be at the higher end although I will be more descriptive from now on in. 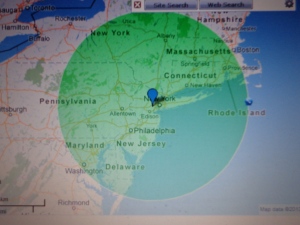